Anthony Fuga’s Section 101 blog is a must-read for anyone trying to determine the often difficult-to-discern boundaries of subject matter that is too abstract for patent protection. That issue is central to patenting inventions embodied by software because software is often, by its nature, an abstraction of the real world. Anthony’s post below provides one example of a court rendering patented software processes ineligible for protection under the Patent Act.

The patents-in-suit purportedly solve these inefficiencies by “creating a platform through which consumers, dealers, and manufacturers can input, access, or filter through a range of available automobile market data and use that data to complete automobile transactions.” The system is designed to efficiently match consumers with dealers, manufacturers or other consumer automobile sellers.

Below is a representative figure from one of the 12 patents: 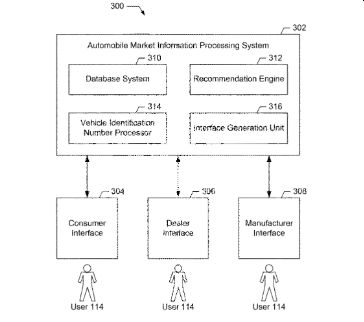 Vroom brought a declaratory judgment action against Sidekick and filed a Rule 12(c) motion for judgment on the pleadings, arguing that each of Sidekick’s relevant patents is directed to ineligible subject matter under Section 101.

The court first addressed what claim or claims are representative of the 405 claims across all 12 patents. The court noted that it may treat claims as representative even where the parties do not agree to such treatment: “Less established, however, is the appropriate framework for resolving disputes over which claims are in fact representative.”

The court, having heard the parties’ arguments and reviewed all 12 patents, chose one claim that includes “the major elements and limitations argued by the parties for and against eligibility, including, for example, the use of geolocation data and driving directions” as well as “the additional element of storing automobile market data,” along with “with minor exceptions that no party has suggested bears on the eligibility analysis.” The representative claim is included at the bottom of this post.

At step one, the court looked at the language of the claims to determine what the patent asserts to be the focus of the claimed advance over the prior art, with the critical inquiry being “whether the claims focus on a specific means or method that improves the relevant technology or are instead directed to a result or effect that itself is the abstract idea and merely invoke generic processes and machinery.” The court noted that in the context of software innovations, the inquiry “often turns on whether the claims focus on specific asserted improvements in computer capabilities or instead on a process or system that qualifies [as] an abstract idea for which computers are invoked merely as tools.”

Here, the court determined that the patents are directed to the abstract idea of ​​collecting and using automobile market and user data to facilitate automobile transactions.

The representative claim “recites no more than the sort of collection and storage of information that courts have routinely found abstract at Alice step one,” and the remaining claim elements “recite a computerized method of performing the basic steps in an automobile transaction.”

Specifically, the court found that the representative claim recited the following process:


In short, the court found that the representative claim “merely combines abstract concepts and practices to describe the longstanding and fundamental practice of searching for and using available market information to complete automobile transactions.” Furthermore, the court found that the representative claim “does not focus on or describe any specific technological improvement … [and] the specification makes clear that the problem the patents-in-suit are designed to address is not one in either data collection or storage … Rather, the specification identifies the problem as one of imperfect information.”

Finally, the inclusion of real-time market data, geolocation information, optical character recognition or driving directions did not save the patents-in-suit. While those limitations may ensure that the patents-in-suit do not preempt the entire field of automobile transactions, the court found that “a narrow claim directed to an abstract idea, however, is not necessarily patent-eligible, for while preemption may signal patent ineligible subject matter, the absence of complete preemption does not demonstrate patent eligibility.”

The court, at step two, found that the representative claim failed to sufficiently recite an inventive concept, even if the claim does confer advantages over the prior art. “the Court may assume that the techniques claimed are groundbreaking, innovative, or even brilliant, but that is not enough for eligibility.”

The defendant argued that the patents-in-suit were “new and innovative” methods that offer “a synergistic and optimal resource.” The court, however, found these statements to be conclusory and, instead, the representative claim did not “recite any new process, technique, or method in performing any of the claimed features or limitations.”

The court concluded that what was claimed were “ordinary data storage and processing functions of a computer unaccompanied by any description or explanation of a specific or unconventional development or implementation thereof.”

The court, accordingly, granted Vroom’s motion for judgment on the pleadings and found all claims of the 12 patents to be patent-ineligible under Section 101.

receiving, via a consumer interface, a first request for a response regarding a first automobile, which is manufactured by a first manufacturer, the first request made by a consumer located at a first location and including geolocation information of the consumer;

executing instructions, by at least one processing device, to:

determine, using the geolocation information, that the consumer is located at the first location;

determine that the first dealer is located at a second location within the in-market dealer area;

request, from the first dealer, via a dealer interface, an inventory less bid to sell the first automobile based on the first manufacturer response;

The content of this article is intended to provide a general guide to the subject matter. Specialist advice should be sought about your specific circumstances.